Winteracter is available for Linux, MacOSX, and Windows. Each includes versions for use with all the supported compilers on the corresponding platform, allowing creation of both 32 and 64-bit applications (depending on the compiler used). 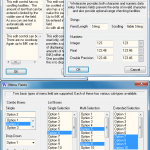 Winteracter is a GUI toolset for the Fortran programming language. It consists of various visual development tools and a substantial subroutine library.

Several Fortran compilers are supported. Winteracter is specifically designed for use with compilers which support Fortran 95 or later.

Download a free Winteracter demo which provides a concise illustration of most Winteracter features, or – evaluate Winteracter for 1 month with selected Fortran compilers on Windows, Linux, or MacOSX. We recommend looking at the demo first.

Software developed using Winteracter under a Commercial Licence may be distributed to any third party. ISS does not claim any run-time licence or royalty fees on such software.

Software developed using Winteracter under an Educational Licence is subject to the same conditions as that developed under a Commercial Licence with the exception that distribution of such software is limited to educational or research establishments. No charge may be made for such software other than reasonable media and handling charges. An Educational Winteracter Licence may be converted to a full Commercial Licence on payment of the currently applicable upgrade fee.