Stop guessing why software is slow. Advanced sampling and profiling techniques quickly analyze your code, isolate issues, and deliver insights for optimizing performance on modern processors.
Intel® VTune™ Amplifier is also available as part of the Professional and Cluster Editions of Intel® Parallel Studio XE (for Linux and Windows).

Without the right data, you’re guessing about how to improve software performance and are unlikely to make the most effective improvements. Intel® VTune™ Profiler collects key profiling data and presents it with a powerful interface that simplifies its analysis and interpretation. Optimize software for:

The Intel® VTune™ Amplifier is also available as part of the Professional and Cluster Editions of Intel® Parallel Studio XE (for Linux and Windows). 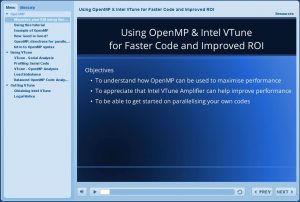 shows the performance effect adding a single OpenMP statement to some Fortran code which is then compiled with Intel® Fortran.

Since the example being used contains a load balance problem, Intel® VTune™ Profiler is used to analyse the performance of this demonstration program.

VTune pin-points the hot-spot that causes the imbalance.

Then, after explaining the imbalance situation, it is shown how to change the OpenMP statement, so that the run-time performance of the example program is further increased.

Finally it is shown that the performance could be maximised by using the optimization possibilities of Intel Fortran.

The maximum speed-up on an Intel Core i7 (4 cores): 3.6 faster than the regular serialised running code.

Feature rich applications in Fortran made possible with graphics tools & libraries like GINO and Winteracter.